How Monsters and Dictators survive in Africa 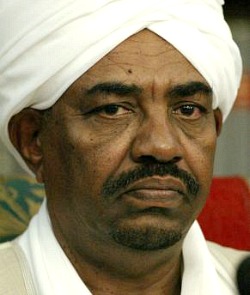 An innocent pregnant woman is about to be sentenced to death in Sudan just for marrying a Christian while a monster by name Omar Al Bashir remains the president of Sudan. Just think about it for a minute. Omar Al Bashir is responsible for the deaths of not less than 600,000 innocent people. He was the mastermind behind the Darfur Genocide and the brutal face of the Sudanese civil war. He has been declared a wanted man by both the United Nations and the International Court of Justice. The sad truth however is that, this monster Omar Al Bashir remains the president of Sudan and sits over the same constitution which is about to sentence an innocent pregnant woman and her unborn baby to death (just for marrying a Christian). This is how monsters survive while the innocent perish in Africa every single day.

Yes Omar Al Bashir is one of the most evil people alive today in this our world. He has been declared a wanted man by the international community yet remains president with several followers. Someone may ask; how could such an evil man have so many followers even in the country he continues to brutalize? The answer to this question is quite simple yet not so many people appear to know. Omar Al Bashir came to power through a coup in 1989 and has remained in power ever since. How could such a person get followers? Well, in case you want to know, Omar Al Bashir is and has remained in power all these years very similar to how Robert Mugabe continues to hang on to power in Zimbabwe even at this his very old age. Unfortunately for leaders like Muammar Gaddafi, they realized their "mistake" when it was too late for them. Monsters in Africa survive under the banners of religion, gender, race, ethnicity, etc.

Some people continue to praise Robert Mugabe not because Mugabe has done something so great for his people. In fact, Robert Mugabe remains the biggest failure in Africa today. Robert Mugabe has remained in power for about three and half decades now yet take a look at Zimbabwe his country. Zimbabwe remains one of the poorest countries in the world today. Is this the mark of a good leader? Absolutely not. Robert Mugabe is and has remained in power all these years why because he was able to pull and use the "race card" successfully to his advantage the same way the monster Omar Al Bashir continues to hide under the banner of religion (Islam). Robert Mugabe was able to build so much hatred towards the White people in his country especially at the end of the war in 1979 to the point where Mugabe appeared a hero and a "messiah" in the minds of most Africans. Most Africans till this date believe the "White man" is the problem and considers anyone who stands against the "White man" as a "freedom fighter" and that my friends, is the main reason why Robert Mugabe continues to have so many supporters despite all his atrocities. Does it make much sense to take away a farmer's land yet fail to cultivate the same piece of land that once fed you? Robert Mugabe drove away the White People from his country and took away their lands but what did Robert Mugabe do with all those lands? Robert Mugabe gave those lands to his immediate friends and relatives while the poor farmer had no land at all to farm on. Now take a look at Zimbabwe. Robert Mugabe has all the land to himself yet his people go hungry every single day.

Omar Al Bashir continues to brutalize innocent people especially the Non-Muslims with all the support of his people why because any "Non-Muslim" according to his religion is an "infidel" and must pay the ultimate price. In other words, to some of his "Muslim" friends, Omar Al Bashir has done nothing wrong because he is a very "religious" man and can justify all he did with the holy "Quran". I put "Muslim" in quote because I don't think Islam is the major problem here. The number one problem here is illiteracy why because I don't think Prophet Mohammed was that insane and heartless as to teach his people to brutalize Non-believers. Something is very wrong somewhere and until that wrong is "righted", monsters like Omar Al Bashir will continue to commit more atrocities under the dark banners of religion, gender, race, ethnicity, and total lunacy.

Omar Al Bashir has been ousted. Sentenced to prison.