How America and friends pollute Africa 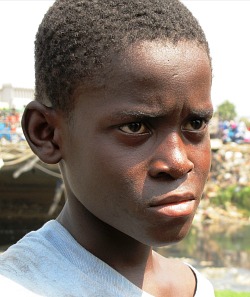 Several strange diseases are appearing in Africa for the first time and killing people in record numbers. However, not so many people appear to know why.

"...They are coming again with ships but this time around not empty ships to pack slaves in. Rather, they are coming with ships full of hazardous waste materials to dump in Africa so as to poison us all dead". -- A resident.

The International Organization for Standardization "ISO" has laid down several rules and regulations concerning E-waste and the proper ways of dealing with E-waste. These rules and regulations work great in western countries. However, when it comes to Africa, nobody seems to care. Giant manufacturing companies likes Apple Inc, Dell, IBM,Toshiba, Sony, Compaq, Microsoft corp, Hitachi, Lenovo, LG, etc. take great pride in the things they manufacture. These giant companies also take great pride in how well they care about the environment and how well they recycle the end products of the things they manufacture so as to help save the environment.

Such is the answer they often give whenever asked questions about the environment. It is great to care about the environment and most of these western companies claim they care so much about the environment which often sounds great on paper. Ask an American manufacturing company right now and they will start from ISO-1 up to ISO-1000000 (especially their favorites ISO 9000, ISO 14000, ISO 27000, ISO 22000, etc) just to prove to the world they care so much about their customers and the environment in general. Ask an Australian manufacturing company right now and they will give you the usual "we care" answers about how well they follow the International Organization for Standardization "ISO" rules and regulations.

The sad truth however is that, most of these western companies do not care much in reality. All they care about is money and how to make more profit. They manufacture these electronic goods on large scale and make huge profits out of them. However, instead of spending just a tiny fractionthe of the huge profits they make to help recycle the hazardous waste they produce, they pack these dangerous waste materials in huge containers, put them on ships and then ship them to poor developing countries such as India, Ghana, Nigeria, etc. Why? Because shipping them to those third world countries cost them very little to no money at all compared to recycling them at home.

Africa benefits a lot from second-hand goods such as second hand clothing and second-hand electronics. However, these E-wastes I am talking about are not second-hand usable goods. They are hazardous electronic waste materials and because we in poor countries do not have protective enforceable laws to help control E-waste, these developed countries ship almost all their E-waste materials to Africa and dump them at times at the very center of busy cities and towns.

In the capital of Ghana for example, there is a huge E-waste dump just beside the biggest market square in the area called "Agbogloshie" where people go to buy and sell foodstuffs. The air is filled with smoke in Agbogloshie. Why? Because just like in India, people, especially young children, burn these electronic waste materials in order to extract the copper and other metallic parts which they then sell to buyers to make money. Although a few claim they make a living out of this dangerous work, they often smoke themselves to death. Why? Because most of these children don't even know the harmful effects of the E-waste materials they work on and the toxic smoke they inhale all day and night. In Ghana, the worst country among the E-waste producers is Australia. Australia keeps shipping huge containers of E-waste materials all the way down to Africa and dumps them sometimes at the very center of busy streets.

The harmful effects of these toxic E-waste materials are already showing in several places in Africa. The air is polluted. The water is polluted. The food is polluted. People are suffering. Plants and animals are dying and all thanks to Australia, America, and other western countries for polluting our beloved continent.

#1 conserd citizen
Wow!. I knew it from the beginning but still the poor Africans have no choice. What can we do apart from coming together and fighting back.
Quote

#2 Tchouanga
That is really serious, the real problem is that most of us African live on these E-Waste to which a band or restriction must lead to an emergence in our territory. Thereby implication of rules and regulation
Quote
Refresh comments list
Add comment