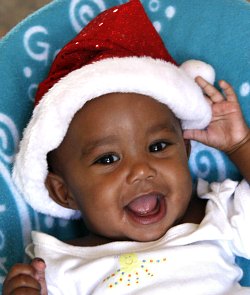 To begin, yes, Africans celebrate Christmas and yes, we love Christmas. In fact, Africa loves Christmas more than any other continent and we take Christmas to a whole new level. Christmas is celebrated throughout Africa and it is the most wonderful time of the year.

In Africa, Christmas is more than just a holiday and we celebrate it with passion. Yes, it is true there is no snow for "Rudolph the red nosed reindeer" and "Santa Claus" to travel on but that does not mean Christmas is dead in Africa. We celebrate Christmas in a whole new style. In fact, Santa Claus would be jobless in my community in Africa on Christmas eve. Why? Because, our "Father Christmas" does not need snow to travel. Unlike Santa, Father Christmas can travel even on horses and as you know, horses are way faster than reindeers. This means, you get your presents on time.

So how do people say "Merry Christmas" in Africa? Well, that is a very big question. As you know, Africa is a very big continent with more than 2000 different languages. Every tribal group has its own languages so it depends on where you go. For example, Ghana, Nigeria, Gambia, Sierra Leone, and Liberia are Anglophone (English-speaking) countries. In other words, English is the official language in these 5 countries so it is not surprising to hear "Merry Christmas" anywhere in these 5 countries. However, you may be surprised to hear "Afishapa" which is just another way of saying "Merry Christmas" in Ghana. "Afishapa" (more correctly, 'Afenhyiapa') means Merry Christmas (or Happy New Year) in the Ashanti language. Ashanti is not the only native language spoken in Ghana. In fact, there are about 46 native languages spoken in Ghana today which implies, there are about 47 different ways of saying Merry Christmas in Ghana alone.

Ghana is a small country compared to giants like Nigeria. Nigeria for example has about 550 different native languages which implies about 551 different ways of saying "Merry Christmas" in Nigeria. The best part however is that, almost every Nigerian knows and understands "Merry Christmas" because English is the official language of Nigeria. On the other hand, countries like Ivory Coast, Benin, Burkina Faso, Central African Republic, Togo, Mali, Niger, Congo, Guinea and Gabon are Francophone (French speaking countries). So instead of Merry Christmas, you can say "Joyeux Noël" which is the most popular way of saying Merry Christmas in French.

Among Lingala-speaking people of DR Congo, Congo-Brazzaville, Central African Republic and Angola, you may hear "Mbotama Malamu" which is just another way of saying "Merry Christmas" in the Lingala language. We can go on and on.

So what do Africans eat on Christmas? Once again, that depends on where you go in Africa on Christmas day. In my community, Christmas without chicken is considered a "dead Christmas". Despite the abundance of sheep, goats, and cattle in my community, chicken remains the "chairman" of Christmas and has perhaps the best "personality" when it comes to Christmas dishes. Just as turkey reigns supreme during Thanksgiving in America, so chicken conquers all other favorites during Christmas period in my community in Africa. In fact, any family that fails to "assassinate" chicken during Christmas time, has broken perhaps one of the most important rules of Christmas and must be prepared to face the consequences (which include having to deal with the shame all year long).