Genocide in Africa: The forgotten ones 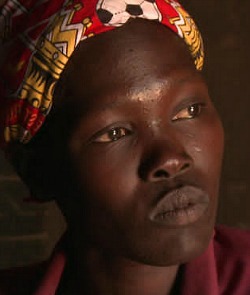 Some people talk as if Adolf Hitler was the only person who murdered the over 6 million innocent Jews including tiny little babies. Some people talk about Adolf Hitler as if Hitler murdered all those innocent people all by himself. However, Hitler had an entire army supporting him. Hitler had several countries and people supporting him. Muslims were there. Christians were there. Hindus were there. Buddhists were there. Hitler did not take the Jews to another planet to kill them. He killed them while the entire world watched. It is true Hitler was evil but what about the rest of the world who stood by and saw all these barbaric things happen but said nothing. Muslims, Christians, Hindus, and all the so-called religious people of the world were watching while innocent people were being slaughtered like animals yet said nothing. Even the pope of the Catholic Church was there but he said nothing. Hitler mostly stayed in the office and gave instructions about how to murder the Jews. Hitler who was giving those instructions was evil. There is no doubt about it. But what about those soldiers and other men and women on the field who were looking directly through the teary eyes of those tiny innocent Jewish babies and still had the guts to cut their tiny little throats open? What about those men and women in uniforms who looked through the painful eyes of their own brothers, sisters, parents and grandparents and still shot them to death?

So you see, it is a huge mistake to call it part of the African game. The entire world is barbaric not just Africans. The best we can do as humans is to step in and help save lives anytime the monsters in us start their barbaric activities. I thought such was the main purpose for the formation of international organizations like the UN. But I was wrong. The UN decided to pull the few troops it sent to Rwanda to help calm the storm just because 10 Belgian peacekeepers died in the process. The UN pulled all troops giving the monsters even more "power" to kill even more people. Over 800,000 innocent Tutsis (and a few moderate Hutus) were murdered while the UN and its members stood by watching as if nothing was happening in Rwanda. Such is the world we live in today and that is why sometimes I cry.

After the holocausts, world leaders pledged "Never Again!" Would they allow such a barbaric mass extermination to happen. But then came genocides in Rwanda, in Congo, in Somalia, in Sudan, in Nigeria and in Uganda. Throughout all these genocides, world leaders just stood by watching. In Sudan, Darfur, over 400,000 were killed with over 2.5 million displaced. More than 2 million people in Uganda have been killed, maimed, imprisoned, or forced into exile.

Genocide is not part of the African game. Genocide has become part of the entire human race because of the monsters in us. The entire world is barbaric and that is why genocides exist yet world leaders continue to treat Africa differently when it comes to helping save lives.

Gyard Os 3 years
That is a very good observation you made about the Holocaust. Hitler is the scapegoat for all of the evil that happened in Europe. He is known as the inventor of the concentration camp. BUT the concentration camp was actually invented by the BRITISH for prisoners of war during the Boer's War.

I think when nations fight, the fighting needs to be kept between the armies and it shouldn't extend to defenseless people: such as children, the elderly, and prisoners. If there was more honor in the human race then these cowardly acts of cruelty would be unfathomable, not recurring. If nations really are proud of what they fight for, then they should fight with valor and courage, not with desperation and cowardice. It takes courage to lose without resorting to atrocity. Both sides in WWII acted like the world would end if they let the other side win. The Hutus killed all of those Tutsis, but then they still lost the Rwandan Civil War anyway; I'm sure they wish they would have just taken the loss instead of committing genocide.

Brian Maobe 2 years 8 months
It is quit disturbing that we world people we are sympathetic but not empathetic. We see an horrifying event taking place but without action we step aside and watch from a distance waiting for help to come directly from heaven. As a traditional saying goes unity is power but this remains a dream for most people, why? because human beings have become egocentric and are concerned with their own well being. So that we will end this so called 'African game'. We have to join hands wherever such occurrence appears so that we put our own interests after other people's.