Gaddafi and Africa: The Murdered Truth 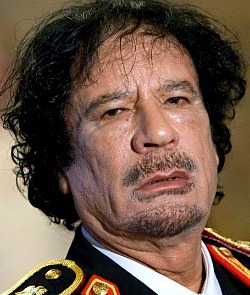 When it comes to the story of Africa, there seems to be many who pretend to know. The sad truth however is that, most of them know very little to nothing at all about Africa. The so-called African experts who know a thing or two about Africa, are often bought and paid for with money and sometimes with just cookies and cheese.

It is true Colonel Gaddafi is dead and gone but what some people don't know is the simple fact that Gaddafi lives on in words and in good deeds. And that my friends, is not to say Gaddafi was a righteous man. Gaddafi wasn't a righteous man. In fact, Gaddafi did so many horrible things during his reign as the "King of Kings" of Africa. I personally don't often blame Gaddafi himself. Rather, I put the bigger blame on his immediate family members especially his sons who did far more barbaric things than the poor old Gaddafi. Yes Gaddafi did some barbaric things and in some ways, it makes sense to say Gaddafi was a wicked man. However, compared to lunatics like Omar Al-Bashir of North Sudan and the criminal sons and daughters of death (politicians) in Washington (America) who continue to destroy Africa, Gaddafi was a saint.

A United Africa as we all know, would empower Africans to the point where Africa would be able to compete on the global scale. It would empower Africa to the point where Africa would be respected not just as another continent but as a partner on the global level. It would make our living conditions far better than those we find ourselves in today. It would break several land, economic, social, and political barriers for Africa and make us "free". However, Dr. Kwame Nkrumah of Ghana was assassinated just when his idea of a "United Africa" was beginning to gain roots in Africa. Why did they assassinate such a great leader? They assassinated Kwame Nkrumah because the West doesn't want Africa to rise. Not just Africa but the third world in general. The higher we rise, the lower they fall so even as we work very hard to get ourselves out of this mess, the western world also works all day and night just to create even more mess for us.

Colonel Gaddafi just like Kwame Nkrumah, had been talking about a United Africa for quite a long time but there wasn't an easy way to get rid of him. The western world was just waiting for an opportunity to strike. A couple of months before he was assassinated, Gaddafi introduced a very beautiful idea. Gaddafi re-introduced the need for Africa as a continent to have a common currency (the Gold Dinar), a currency that would bind all Africa together as one and give us a voice at the global market in the sense that, this currency would compete with the Euro, the Dollar, etc. This idea was a major threat to western powers (especially America).

Right now, the west determines the market price of our gold, oil, diamonds, timber, and other natural resources. However, Gaddafi's common currency would give us a greater say at the international market to the point where we (Africans) would be able to determine the market price of our natural resources. This idea was such a great threat to the western world (especially America) so much so that, they had to get rid of Gaddafi within the shortest possible time (just like Americans did to Saddam Hussein when he talked openly about selling his oil in Euros instead of Dollars) and that explains why they (America and co) were more than ready to sponsor some armed groups to overthrow Gaddafi. NATO was busy bombing Libya not to save innocent people but to destroy the very idea of a better Africa and that my friends, is the truth