Gaddafi a Madman, a Monster, or a King? 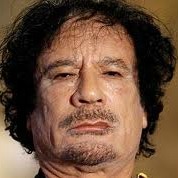 "People who don't love me do not deserve to live." These are the words of Libyan dictator and President Muammar Al Gaddafi. The tyrant is also willing to kill those who do not love or agree with him.He calls himself the "King of Kings of Africa" and even almost assumed leadership of the United States of Africa.

But when really did his journey begin? It was in September 1969 when a group of soldiers then led by 27 year old, Muammar Gaddafi, staged a coup d'état against King Idris launching the Libyan Revolution.

From then on up to date he has been referred to as the "Brother Leader and Guide of Revolution" by government statements and Official press.

Under him Libya faces a lot of changes; first he changed the national flag from Pan Arab colors to a single green banner to represent the Great Socialist People's Libyan Arab Jamahiriya.

School vacations in 1973 were cancelled to teach school children his thoughts. He set up an extensive surveillance system; these informants carried surveillance in the government, factories and the education sector.

When did the rains start beating Libyans? Gaddafi began to execute dissidents publicly and executions are still rebroadcast on state channels, it is like he was trying to send a message to anyone who has different ideas and also to show that he meant business and show his capability. He continued to suppress critics and even recruited "diplomats" to assassinate dozens of critical refugees around the world. Amnesty International reported 25 assassinations between 1980 and 1987. He also poked his nose into his neighbors business; in 1977 Egypt's leader Anwar Sadat showed intent of signing a peace deal with Israel, to show retaliation he launched an air strike against Egypt. This time he had picked a fight that he couldn't handle, Sadat's army triumph easily leaving 400 Libyans dead and most of Gaddafi's armored divisions in ruin on a four day border fight. This was called the Libya-Egypt war.

The following year followed the Chadian-Libyan conflict after Gaddafi support to Chad rebels escalated into a Libyan Military invasion to its Southern neighbors. In the Uganda-Tanzania conflict, he tried to save his fellow dictator and friend Idi Amin, this led to hundreds of Libyans losing their lives. He also financed several Anti-Nuclear movements to Australian trade union.

Even after an air-strike in 1986 failed to kill him and sanctions by United Nations after bombing a commercial air plane killing hundreds, the oil rich country and once very prosperous has been literally bent to its knees with most of its finances spent on arms purchases and sponsoring paramilitary groups and terrorists around the world. The eastern part of the country which was once the country's food basket has been left impoverished since Gaddafi's reign.

The working conditions and environment does not encourage economic growth, it provides for salaries and wages but prohibit independent trade unions. The only legal workers union is the National Trade Union Federation created by the government. It does not provide the right to strike and collective bargaining for workers strike is not allowed since the government must approve all labor agreements. The unemployment rate has increased greatly due to sanctions and Gaddafi's efforts of preventing the emergence of a viable and growing private sector.

All these are the reasons that have led to the 2011 uprising as Libyans cannot take it anymore and are willing to do anything not only to save their country but take it back from the tyrant Gaddafi who has robbed off the country from them, killed and destroyed them. His oldest son Saif Al-islam Muammar Al-Gaggafi seems to be his farthers right hand man and also play a big role in the country's current crisis. He is always on the state television warning of muiltiple deaths and endless war if the rebels do not cease their efforts of ousting his father. His government blames the current revolution on Western countries and Israel, the town of Benghazi seems to be taken by the rebels with Tripoli with most of pro-Gaddafi's. Thousands of protesters have been killed by the army, an air strike was even launched on the town of Benghazi.

Libya's ambassador to India resigned after the 'massacre' of protesters, two Libyan Air Force colonels flew their jets to Malta and defected after they refused to kill the protesters. There are reports of people being shot and beaten after leaving the mosque after prayers, the word is that the mosque is being used to spread the word of overthrowing Gaddafi. Bloggers report that snipers are being used to shoot at groups of protesters with an estimated 1,000 people being killed so far. Government buildings have been destroyed with word that Libya has only about 5,000 devoted soldiers to protect Gaddafi.

Word has it that Gaddafi's hold on the country may not last long as people's rebellions spread and it is only a matter of time before he is ousted. Some are saying that even his vast wealth from oil may not protect him, Gaddafi has vowed to die defending his dictatorship than surrender.