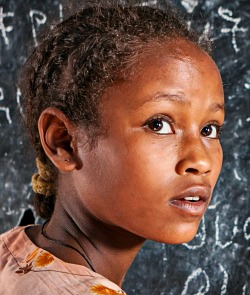 This is without a doubt the number one problem facing Africa today. Illiteracy and the lack of quality education is the main reason why Africa remains in poverty despite the abundance of both human and natural resources.

When it comes to illiteracy in Africa, people mostly think about the lack of school facilities. This is true in most cases. Most villages and small towns across the continent lack school facilities. Some children walk miles upon miles every morning just to get to school. They have to travel long distances to nearby towns each and every morning just to attend classes.

Some of these children give up along the way and join their poor parents in the farm while those determined children who manage to get to their various schools, sometimes meet nothing but disappointments and failure.

Most prominent people in Africa today (including Africa’s king of the tracks and long distance runner Haile Gebrselassie of Ethiopia) can testify to this. Ethiopia's Haile Gebrselassie used to run several miles to and from school every single day. The conditions haven’t changed much across rural Ethiopia.

Those who can run will run but what about those who cannot run? Many of the poor children give up on education and get caught up in the bubbles of illiteracy and ignorance. In most cases, this becomes a generational curse. Poor illiterate parents are less likely to send their children to school which means their children and grandchildren get caught up in this bubble too. Extending the hands of education to more rural towns and communities across the continent (especially in countries like Burundi, Sierra Leone, Liberia, Burkina Faso, etc.) can go a long way in helping break this cycle.

Another major problem facing quality education in Africa today isn’t the lack of school facilities. Rather, it is the lack of what it takes to run those facilities. Take Nigeria for example. In Nigeria today, the rich people and those who can afford it mostly send their children to private and international schools while the poor people are often left with no other choice than to send their children to public schools. Public schools are generally cheaper and even free in most cases.

However, the sad part is that, most of the public schools in Nigeria lack good teachers and school supplies. Some classes are overcrowded. Some classrooms leak when it rains. Some children even take classes under trees. There are only few text books and some schools have none at all. Because it is “public”, nobody cares about these schools. Some teachers attend classes drunk and some even sexually molest their students. Ask some of these teachers and they will tell you they’ve not been paid their salaries for months. Others will tell you, they are just doing the community a favor because their salaries are nothing good to write home about. The government has completely failed not just the students but also the teachers in these public schools.

Another major problem facing education in Africa today is the lack of "quality" education itself. Africa has so many graduates but very few "quality" graduates. Several people graduate from school with degrees upon degrees but with the lack of "application". In other words, most students spend years in school but work very hard just to pass their exams and graduate. Most students graduate with certificates, diplomas and degrees but unable to apply what they’ve learned to better their everyday lives.

A friend I met in school (in Africa) knows almost everything about American politics. He could list all past American presidents and tell you stories about their lives. Meanwhile, this friend of mine couldn't tell you the best time to plant yam and he had absolutely know idea when and how to water and nurse tomato seedlings. The point I am trying to make here is that, we learn so many unnecessary things in school instead of focusing on the most important things in life. Instead of American politics in African schools, we could be learning about proper ways of growing crops and rearing animals.

Another major problem hampering quality education in Africa has more to do with our archaic culture and barbaric religious practices.

Women are the backbone of healthy societies. Educated girls grow up to become educated mothers and educated mothers form the backbone of healthy homes. The sad thing however is that, in the case of Africa, some of our culture, traditions and religious practices often portray girls as inferior to boys. Some parents send their sons to school while keeping their daughters in the kitchen. At the end of the day, the young girls receive no formal education and they are forced into early marriages all because of illiteracy and ignorance.

#1 Cat
Very true. Governments need to do more in the education sector. So many children are discouraged to attend schools because of the conditions the schools are in. Some students learn under trees, some face a lot of dangers on their way to school, teachers are undertrained and underpaid. It's better in cities and urban areas though as more schools are available and teachers are better trained. Lack of provision of meals in schools is also another problem.
Quote
Refresh comments list
Add comment