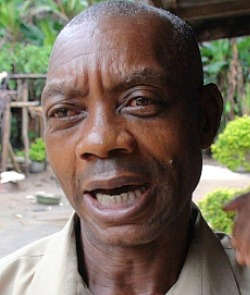 Several meaningless borders continue to divide Africa today. Africa today is like a termitarium with so many tunnels leading to nowhere. We all pray for a united Africa. Why? Because there is power and strength in Unity. Unity breeds understanding and understanding breeds hope. Unity breeds trust, power, and love and with unity, even the impossible becomes possible.

Just imagine a world whereby all people live together peacefully as a united community. Just imagine all the 55 separate countries in Africa coming together to form one big community. Imagine a United States of Africa and imagine the power and strength such a unity could bring. Imagine Africa without all these meaningless borders. Just imagine Africa whereby goods and services flow freely from one state to another.

Just imagine an Africa without all these barriers and imagine the market boom and prosperity such a unity could bring.

There are now two Sudans in Africa but it used to be one big Sudan not long ago. Sudan was separated into two countries (North Sudan and the Republic of South Sudan) not long ago. Now there is a border between North Sudan and the new Republic of South Sudan. The numerous peace agreements did not solve the problem (clashes between Muslims in the north and Christians in the south). The numerous peace talks were almost a waste of time in Sudan. The political and religious talks even worsened the situation in Sudan. We all know what happened in Darfur. Darfur was just part of the problem. Several innocent people continued to die for no fault of theirs at all. And at the end of the day, there was no other option than to divide Sudan into two (Muslims in the north and Christians in the south).

There is a similar situation in Nigeria. Throughout history, there've been several clashes between Muslims in the northern parts of Nigeria and Christians in the south and anytime such clashes arise, 100s if not thousands of innocent people loose their lives and livelihoods. Meanwhile, greater part of Nigeria's wealth lies in the south and dividing Nigeria into two would rather worsen the already bad situation in the north. The northern parts of Nigeria remain the poorest parts in the entire country and separating the poorer north from the richer south would just worsen the already bad situation.

Right now in Nigeria, an Islamic extremist group (terrorist group) by name Boko Haram continues to terrorize the few Christians in the north. Not just Christians, Boko haram even terrorizes Muslims and people of other faiths all in the name of making their voices heard. And what exactly does Boko haram want? According to Boko haram (which means western education is evil), they need an independent northern state. In other words, Nigeria must be divided into two separate countries (with Muslims in the north and Christians in the South just like in Sudan) and Boko Haram has sworn to continue fighting until they achieve their aim. Thousands of innocent people have lost their lives since the beginning of this year. Several homes, cars, factories, etc. have been destroyed in the north and it is not the first time this is happening in Nigeria. It is becoming very common in Nigeria today.

Division is not the best solution especially in these modern times. However, in situations where there seem to be no other available options, division appears to be the only solution. Although not yet the most populous answer in Nigeria today, division continues to gain roots in the hearts and minds of the people who are already sick and tired of these several clashes. It is true quality education is the answer to most of our questions. It is true education is the key to solving most of these problems but until good education gains roots in the hearts and minds of all Africans, division shall always remain an option in Africa.