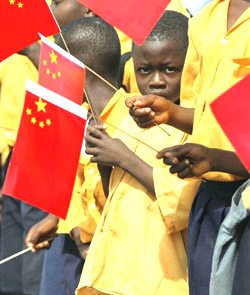 Some even consider it a mutualistic relationship all because of the numerous deceptive tools China uses to "convince" Africa. It is hard to tell unless you are there in the small towns and villages watching your rivers, streams, farms, timbers, entire mountains, disappear within a blink of an eye. It is hard to tell because our corrupt leaders are bought and paid for to hide the truth. The average African is left alone to suffer in the dark without ever knowing the truth.

Water bodies are being poisoned. Innocent people are being shot to death in the small towns and villages by these numerous Chinese operators in Africa today but it is almost impossible to see such stories in the news why because our corrupt leaders have been bought and paid for to hide the truth.

Any single road China constructs in Africa today, makes headlines for months upons months but it is quite unlikely to see any of the bodies of the dead poor Africans in the news. China has taken over Africa and they have done so quite successfully.I could tell their deceptive nature from the very beginning but not so many people took me serious why because of the projects China had already started in Africa.

China is in Africa not as economic partner as some people think but as a colonial master ready to take advantage of poor Africa and it is quite easy for them because our leaders can be bought and paid for easily with cookies and cheese. This is not the first time China is coming to Africa. Infact, China has been on the continent for quite a long time. China is just expanding its footprints on the continent. Not so many of you know and most of you have forgotten but China was a major backer of the wicked Omar Al Bashir of North Sudan the guy who demonically planned and murdered hundreds of thousands of innocent people in Darfur. While NGO's and other organizations where working very hard to help save lives in Darfur, China was busy supplying Omar Al Bashir with guns and other ammunitions in exchange for oil. Now China is back again and Omar Al Bashir remains their very good friend.

Some claim China is in Africa to help because of the numerous roads and rail lines China has been busy constructing all across the continent. However, not so many people know the simple fact that China is just creating a network to link our natural resources for easy take over. This is not new to Africans. The Europeans did the same in Africa. The Europeans began by building roads and rail lines just like China is doing. In Ghana for example, the Europeans built rail lines in places like Kwahu, Nkwakwa, Takoradi, etc. purposely to transport natural resources.

Some consider it just a myth but it is not. China's involvement has crippled several local industries in Africa. For example, the cheap china-made clothing has severely crippled the indigenous clothing industry in Africa. In other words, China is forcing their China-made goods on us while crippling our indigenous industries at the same time. Is this the kind of partnership Africa needs?

If China is in Africa to help in the long run then why doesn't China train Africans? Why should China bring workers all the way from China to come complete projects started in Africa? Why doesn't China use some of the money they use to import Chinese workers to train some hardworking Africans so we (Africans) can take charge once China is done and gone? Is this the kind of partnership Africa needs?