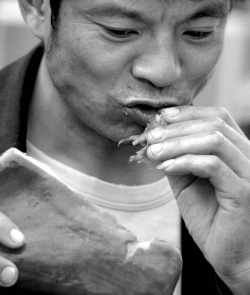 The first time I read about the flourishing dog meat industry in China, although I was shocked and sad at the same time, I still thought it was unfair to judge China based on my own cultural beliefs. To most of us (Africans back home) and most people around the world today, dogs are considered pets and man’s “best friend”. Therefore, I was shocked to see some heartless Chinese men busy butchering dogs and preparing their meats for the market where people paid huge sums to buy them. On the other hand however, I thought maybe what we consider “pets” are what Chinese people consider “beef”. An Indian would be mad to see us butcher cows and enjoy beef. Why? Because cows are considered “sacred” animals in Hindu and sacred to most Indians for that matter. To most of us on the other hand, Cows are just “food” waiting to be cooked and enjoyed. In other words, I thought it would be quite unfair to judge Chinese people based on my cultural beliefs and practices.

Elephants and Rhinos are going extinct today. Why? Because some carving industries in China have specialized in carving things out of the tusks of majestic creatures like elephants and rhinos and they don’t care whether these animals go extinct or not. Just think about it. A Chinese man in Africa today would rather pay some poachers to track and shoot down a mighty animal like the elephant not for food but just for its tusks/ivories and watch their massive bodies rot away all for the sake of money. In the case of the dog meat, although it is a very sad situation, I get the point. Dog is "food" to some Chinese people and it is traditional to eat dog meat. However, what is the sense in shooting down a mighty animal like the elephant and leaving its massive body to rot away? Where is the heart in shooting down a majestic creature like the elephant in the first place? Where is the heart in shooting down a great creature like the Rhino? The sad thing is that, to most Chinese people in Africa today, none of these creatures matter. What matters most to these heartless Chinese people roaming the streets of Africa today, is money and more money. They'll rather butcher all of Africa's symbolic animals just so some crazy old Chinese men in China can claim portions of the creatures bodies as "art work". This is another reason why China must be restricted and perhaps even "tamed" in Africa.

For the first time in history, donkeys are disappearing from the surface of the planet and who is to blame? To those of you who don’t know, the answer is no other country but China and its heartless population. Someone may ask; why China? Well, donkeys are being slaughtered at an alarming pace to feed a global trade in donkey hides that’s fueled by soaring demand in China, where the skins are used to manufacture a gelatin believed to have anti-ageing and libido-enhancing properties. The gelatin, known in China as e’jiao, is so popular with middle-class consumers that a Chinese producer has created a donkey exchange to help companies find enough hides to keep their factories busy. To those of you who don’t know, China had over 11 million donkeys in the early 1990s. Today, there are less than 3 million donkeys in China. China is now looking for donkeys elsewhere and where else to turn to if not Africa? Donkeys are disappearing from Africa at an alarming rate and if no care is taken, there will be no donkeys left on the continent.

Most farmers in Africa are poor subsistence farmers who grow crops and rear animals just to feed themselves and their families. With the lack of farming machinery like tractors and harvesters, these farmers depend mostly on farm animals like cows and donkeys in their day-to-day farming activities. Donkeys for example, help a lot in transporting farm produce to the market. With donkeys gone, most farmers have nowhere else to turn. In other words, China’s crazy donkey trade directly and indirectly affects even food production in Africa, India, and other parts of the world.

#1 Alok Shukla
Not a fan of China but the problem of poaching you are talking is international. The ivory is in huge demand not only in China but in many other parts of this planet including India & US high class societies. Then, even if Chinese are heartless and are offering money to the african poachers, it's the african hunters who are actually shooting these majestic animals for money. SO all sides are to be blame. The person, who gives money to hunt, the person who takes money & hunt & the person who gives money to purchase the product. Butcher is not the person who purchase the meat and cook but the one who actually uses the knife to kill an animal.
Quote
Refresh comments list
Add comment