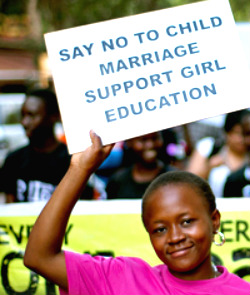 Whenever extreme religious beliefs and common sense crash, the weak and the innocent often suffer for no good reasons at all. Whenever Religion and the State crash, the innocent citizens including tiny little babies suffer the most. In a land where the stupid reigns supreme, there can never be peace and in a land where the pedophile makes the laws, no child can be guaranteed safety. No girl child is safe in Nigeria today and that is simply because the Nigerian Senate is full of pedophiles and perverts.

Nigeria is the most populous country in Africa today with a population of about 202 million people. About 50% of Nigerians are Muslims. Christians make up about 40% of the total population with the remaining 10% being Traditional worshippers.

Because of the huge presence of Muslims in Nigeria today, Islam influences most of the country's laws and regulations. In other words, Islam influences Nigeria's constitution to a far greater extent than expected. One such influence is the issue of child marriage. The Islamic world sees nothing wrong with child marriage even as the rest of the world frowns at it. Most Muslims in Nigeria today argue the holy prophet of Islam, Prophet Mohammed, married a 6 year old girl by name Aisha which makes child marriage OK. The sad part however is that, the holy prophet slept with Aisha when Aisha was just 9 years old. The holy prophet was about 56 years old when he first slept with Aisha (and "consummated the marriage").

The holy prophet Mohammed was a very good and virtuous man according to the holy Quran and I don't think he would commit such a great crime. Maybe child marriage was legal in those days and people saw nothing wrong with that. Maybe the 6 year old Aisha was deemed an adult in those days and ready for marriage. None of us can truly tell. However, if the holy prophet were to be alive today (in any civilized society), he would be in jail for defilement because Aisha was underage. In the Islamic world however, there seems to be nothing wrong with what the holy man of Allah did and in fact, most leaders of Islam continue to preach about following the footsteps of the holy prophet on this particular issue. Such is the case in Nigeria today. Most of the Nigerian Senators are Muslims and they see nothing wrong with child marriage.

In Nigeria today, massive protests have continued to trail the Senate's passage of a resolution to retain the provision of Section 29 (4) (b) of the 1999 Constitution. Under the section, a married underage girl is deemed to be an adult. Prominent Nigerians and human right organizations took to the social media to protest what they described as legalization of sexual abuse of underage girls. Some of the protesters in Abuja, Lagos and other parts of the country, queried why underage Nigerians could not exercise their franchise at the polls yet are being subjected to marriage at such tender age.

Here are the names of the 35 Nigerian Senators who voted for the legalization of child marriage on the recent senate resolution:

As you can see from the names above, almost all these Senators who voted for the legalization of child Marriage in Nigeria today are Muslims. In other words, these Senators mostly voted based on their shared religious beliefs. This once again goes to show how the "religion of peace" continues to destroy our beloved continent Africa.

Shadrach 2 years 3 months
Africans in wherever they are must learn to have a common ground to stand on to avoid being victims of any inhumane behavior that compromise their integrity. They have lived across generations and their highly valued culture and way of life must be preserved for future generations regardless of whether they are poor or rich, this is the most precious of all. Children must be taken through humane instructions, domestic chores, African values and norms, a way to make them appreciate that anything of value and African such as their own mother tongue, foods, dress code, marriage, sexuality, family and kinship bonds are very vital. If Africans cannot boast and be proud of their own identity, then who do you think can take that pride on their behalf? Millions of world money cannot purchase or change their identity after all. Note that this does not mean that you avoid relating with our brothers in other comers of the world. we must but not for evil and inhumane practices! be African, love Africa and wisely co-exist with fellow earth men and women.