Barack Obama and Africa: The Truth 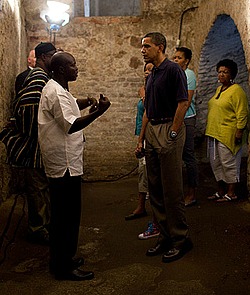 I am happy he got re-elected because now at least he has a "freer" hand on some issues. Honestly, if I were an American with a vote, I would probably vote for Obama and not because Obama is the best guy for the job at this time but maybe because I would feel a little bit uneasy voting for Mitt Romney.

In 2008, we all prayed Barack Obama win but not this time around. In 2012, the choices were very limited. Considering the deaths of untold number of people in Iraq, Afghanistan, Pakistan, etc. during his two terms in office, it makes perfect sense to refer to ex-president Bush as an evil man. However, it may surprise you to know that President Bush despite all the war-crimes in his name, helped Africa more than any other United States president.

We Africans still love Obama because he is our brother and nothing is going to change that fact. In 2008, many churches across the continent dedicated special services just to pray so Barack Obama win the elections and Africa became the happiest continent when Barack Obama won the elections and became president of the United States. In fact, George Obama (Barack Obama's half-brother) did not sleep that elections night. He like many Africans across the continent was hooked to his small television set with his radio by his side listening and watching every bit of news he could get about the elections and he became one of the happiest men on earth when he got to know very early in the morning that his elder brother has made history.

However, Ever since Barack Obama became president of the United States, he has set foot on the continent of Africa just once. Barack Obama visited Ghana somewhere in 2009 and during that visit, people sang praises, and danced just to welcome him. Some women even spread their clothes on the ground so Obama could walk on just like the return of Jesus to Jerusalem. We did all that to welcome Barack Obama not because we considered him a messiah but because we considered him a proud son for making Africa and the rest of the world very proud.

Such was the feeling somewhere between 2008 and 2010. However, just like a lighted candle in the wind, this feeling began fading away so rapidly that in 2012, not even 2% of Africans bothered about Obama's re-election and when asked why they felt not bothered, the answers they gave were quite similar. Barack Obama has failed Africa miserably including Kenya his ancestral home. He has failed even his close relatives in Kenya including George Obama his younger brother and Sarah Obama his grandmother. His Kenyan relatives still wallow in poverty.

When Obama successfully eliminated Osama Bin Laden somewhere in May 2011, a terrorist group called Al-Shabaab a branch of Al-Qaeda based in Somalia threatened to eliminate all of Obama's close relatives in Kenya as a form of revenge. I thought maybe Obama would do something about it but I was wrong. If not for the Kenyan special force the government sent to protect those innocent people and the kind Kenyans who volunteered to help, at least the poor old Grandma Sarah Obama would be dead by now. We all knew the kind of mess George Bush left behind so we weren't expecting Obama to come solve all our problems for us. However, we expected him to at least help his immediate relatives in Kenya especially Sarah and George.

In fact, I lost almost all hopes in Barack Obama somewhere April, 2012 when he sent special troops to the jungles of Uganda to go capture Joseph Kony. We all know what happened in Iraq just because of oil and I give thanks to the God of Africa for saving Uganda. Just look at how quick Obama helped destroy not just the so-called "monster" of Africa Moammar Gaddafi but also the entire country of Libya all in the name of NATO.  Once again, we are not saying Obama should come build mansions and soup kitchens for us here in Africa. All we are saying is that, he (Obama) should not help destroy if he cannot help build. We are happy Barack Obama got re-elected. At least now he has another chance to help not just Africa but the rest of the world. We his brothers here in Africa wish him nothing but the best. Let us just wait, pray and see.

UPDATE (6/22/2013): President Barack Obama has finally decided to go on a  week-long trip to Africa beginning next week. Obama will visit Senegal, South Africa, and Tanzania. Tanzania is an East African country bordering Kenya (Barack Obama's ancestral country). Senegal is a West African country and ofcourse South Africa which is found in the Southern part of Africa. According to Ben Rhodes, the White House deputy national security adviser for strategic communications,

"We see Africa as one of the most important emerging regions in the world and a place for the U.S. to significantly increase our engagement in the years to come".

China, Japan, and so many other great investors are coming to Africa so it would be odd for the United States to stay out of the "big game". However, it would be nice if Barack Obama keeps this trip "traditional" by putting Africa in the headlines rather than being yet another "business trip".