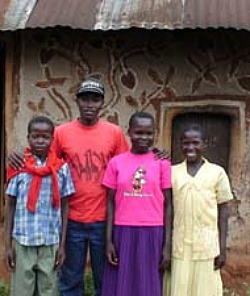 I am ALois Murerwa Maingi, 27 years old and a Kenyan Citizen and single. I live in Meru about 300kms from the capital city Nairobi. I saw your information on the internet and thought you could of great help to the suffering children so as to save them from going through what I went through and still going through.

I did my form four exams on November 2001. Thereafter I learnt little on how to use the computer. My trials of taking a management course has had been my desire to be a manager had been very difficulty. I enrolled in Kenya Institute of Management in Year 2008 for a Human Resource Management course. I dropped out due to lack of money to pay the fees. In short have suffered a great deal. Currently am working with a pay of Kshs. 4,000/= (equivalent of USD $53.3), the amount which can handily meet my basic needs

Illiteracy, ignorance, diseases, drought and famine, lack of employment opportunities and unavailability of adequate development funds, are some of the factors that compete to make this region poor and dreaded place to live and work in.

Besides being poor, people have limited access to basic human needs such as food, clean drinking water, health care services, housing, education and security. Due to numerous problems and lack of awareness many peoples are infected with HIV/Aids. As a result there are many widows and orphans are countless. Many children don't go to school due to luck of food, scholastic materials, and basic needs and others are at home taking care of their sickly parents. You may not hold tears when you see the suffering of these children. In some instances when the two parents die or are very sick, the elder child is the one who takes over the responsibilities. Many have been traumatized because of being exposed to scores of problems since birth. Generally we found that women and adolescent girls are more vulnerable to HIV infection because of the biological nature of the process and the vulnerability of the reproductive tract tissues to the virus, especially in adolescent girls. For example, young women are generally disadvantaged by gender disparities. In terms of food intake, access to health care and growth patterns, girls are often worse off than boys.

The inequalities become evident soon after birth, and by adolescence many girls are grossly underweight. Social Cultural and economic forces make women more likely to contract HIV infection than men. Women are often less able to negotiate for safer sex due to reasons such as their lower status, economic dependence and fear of violence. Adolescents in poor families often do not have the option to make real choices about their sexual and reproductive lives, such as when and whom to marry, whether and when to have children and how many to have, and whether to use contraceptives. Women tend to marry very young: nearly two thirds of adolescents in most girls marry before 18 years of age, and many even before 15 years, despite laws exclusion such early marriage Women's limited economic opportunity, and relative powerlessness, may force them into sex work in order to survive with household financial disaster. This exposes them to HIV infection and they in turn will transmit HIV to their clients. In those areas girls are particularly vulnerable to HIV infection, because of intergenerational sexual relationships, violence, and limited access to information.

In addition, discrimination and stigma obstruct adolescent girls' access to health services. Poverty causes increased migration to look for work. Mainly, poverty, and gender discrimination between women and men, are both strongly linked to the spread of HIV/AIDS. Gender and age analysis shows the ways in which women and girls of different ages are vulnerable to the infection, and in require of support to allow the survivors to overcome the financial and social effects of the epidemic. Social powerlessness, poverty and economic dependence contribute to the vulnerability.

The HIV/AIDS epidemic has been fuelled by gender inequality. Unequal power relations, sexual coercion and violence are a widespread phenomenon faced by women of all age-groups, and have an array of negative effects on female sexual, physical and mental health. HIV/AIDS infection reveals the disastrous effects of discrimination against women on human health, and on the socio-economic structure of society.

Usually, due to luck of education, employment opportunities are very far from them. For girls face family and societal forces for early marriage and childbearing. Early marriage and early childbearing are the norm in here. In simple terms, life here is very difficult for majority of the people especially the children who are sometimes forced to drop from school because of lack of uniforms, school books, instructive materials and school maintenance fees. It's my kind and humble request that you intervene to change the lives of these children. They are the parents of tomorrow and if they have a firm base they can bring their future children up well. Save their lives, bring them out of poverty and sorrow.

I wish you God's choicest blessings. I hope to hear from you. My Email Address is aloismaingi@gmail.com

Thanks a great deal for your active participation in the lives of the needy poor children of God. Wishing you all the best in all your endeavors.