AfriCom: How the US butchers poor Africans 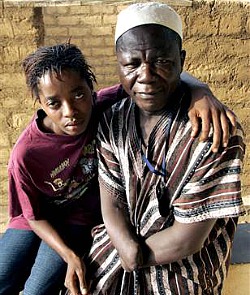 Not so many people know and not so many people understand. Why? Because the few who know do not share and the few who understand do not explain and so the story continues but in silent dreams - dreams full of several "whats" and "whys". The very few good Samaritans who decide to share what they know are often handsomely rewarded with early graves while the very few who try to explain, end up with barbecued tongues.

Our maker did not put us here to suffer yet we continue to suffer all day and night. "A hand that does not work must not eat" yet some of us are left with no limbs at all.

The United States' military spending was around $711 billion in 2008, about 48.28% of the global total war expenditure (which stood at around 1.472 trillion dollars in 2008), followed by China about 8.28% of the world's total, Russia with 4.75%, and the UK with 3.76%. The US has over 700 military bases worldwide. The US is the only nation that divides the world into military commands with a general controlling each region.

On February 6, 2007, former president Bush announced the creation of a US Africa Command (AFRICOM) to fight the war on terror on African soil (and to protect "resources"). Someone may ask, is this the first time the US is militarizing Africa? The answer is a very big NO. AFRICOM is just an expansion of US military footprint on the African continent.

Just thing about it for a second. At a time when the continent needs development, needs housing, good education, healthcare, etc. which are the core building blocks of healthy societies, the US responds with arms, military training, and other materials of war.

To those of you who don't know exactly what the US military and militarization does in Africa, here is a very short history for you. I cannot list them all but here are some important time periods to note. In 1820, the American colonization society founded Liberia. In 1965 a CIA (Central Intelligence Agency) backed coup in Congo brought the wicked monster Mobutu to power. Mobutu's 30 year regime "officially" embezzled not less than 7 billion dollars (the true figure however is way bigger than this) from his country's coffers and killed tens of thousands of innocent people mostly in the dark. In the 1980s, the US military trained and equipped Samuel Doe's army in Liberia. Samuel Doe's army then killed over 300,000 Liberians including tiny little babies. Patrice Lumumba, the first democratic elected leader of Congo was assassinated by the CIA. Congo was granted independence from Belgium in 1960 and the beloved Patrice Lumumba was democratic elected its leader. The west considered Lumumba "uncompromising" and a communist (enemy of the US). Supported by Belgium and the US, Lumumba was arrested and finally assassinated in 1961. Instead, the US army supported crazy leaders like Mobutu who literally gave the Congo (which is the richest part of Africa in terms of natural resources) to the US on a silver platter. That was the beginning of much of the problems we see today in the Congo.

Take a look at what happened in Libya just recently under NATO's banner. When KONY 2012 first came out, some of you were so angry to the point where you wanted to kill that bastard called Joseph Kony with your bare hands. However, it may surprise you to know that the rich and powerful in America today are worse than Joseph Kony. Joseph Kony abducted little children and turned them into monstrous killing machines. However, it may shock you to know that Joseph Kony did not start his atrocities in 2012. In fact, Kony had been committing those atrocities for nearly 3 decades and no western power came in to help. The western world first mentioned "Kony" in 2007 after the first Ugandan oil discoveries were made 2006. Kony reappeared in 2012 after more oil discoveries were made in 2011 and this time around, the US and co were more than ready to send some armed troops to the jungles of Africa to go capture Joseph Kony. Also, it may surprise you to know that over 90% of the guns and other ammunitions Joseph Kony and his group used to commit those atrocities, came from America and other western countries. In other words, these western countries who claim to be messengers of peace are the same countries who continue to fuel war zones in Africa.

China and Russia were openly supplying Darfur with fireams all in exchange for oil while innocent people including tiny little babies were dying like flies. America came in as a saint but ended up partaking in similar evil deeds but this time around through Israel (America's favorite son). They (the greedy rich corporations) are always modifying their methods. Now what they do in some parts of Africa is that, they create conflicts, demonically manipulate the various sides and then supply the various sides with machine guns, bombs, armored cars, etc. to fight and kill themselves so that in the end, they (the greedy rich corporations) can rush in as "peacekeepers", kill several innocent people and then take over just like what happened in Libya not long ago.

Now people are talking about terrorism in Africa. Yes there are so many terrorist groups in Africa today. Boko Haram, Al Mourabitoun, etc, continue to tear West Africa into pieces. ISIS, Al Qaeda, etc, have taken over North Africa and Al Shabaab, AQIM, etc, are more than ready to burn East Africa into ashes. There is no doubt where these terrorist groups come from but the question we fail to ask ourselves is; who actually sponsors these numerous terrorist organizations? Where do ISIS, Boko Haram, Al Shabaab and the others get their supplies from? Where do all the bombs, armored cars, machine guns, etc, come from? It may surprise you the kind of sophiscated machinery some of these terrorist organizations use.

Amandla Awethu 4 years 3 months
Boko Haram, Al Queda and Isis are all Imperialistic creations. Funded and trained. Their goal is to destabilize nations so that the natural resources will be open to the West - to prevent stability and growth in the Middle East and Africa.