African Revolution: Why the poor should revolt 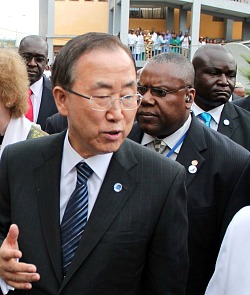 Yes life is beautiful but don't forget we live in a very wicked world. The heart of man is desperately wicked and that is why we continue to suffer in the world today.

Nobody deserves to be treated like a sub-specie in a world given to us all freely by our maker. There is something very wrong somewhere that we need to fix and we need to do so now.

The rich get richer while innocent people continue to die in absolute poverty and hunger. Africa has all it takes to be the greatest continent in terms of fighting poverty and hunger. Africa has all it takes to be the best society to live in. yet what do we see? The very few corrupt and wicked-minded politicians continue to tear the continent into pieces. They continue to enjoy why the innocent continue to die. I love peace and understanding. Peace breeds understanding and understanding breeds progress. Progress is what Africa needs the most so there is no doubt the very few good Africans love and cherish peace more than anything else. I love and cherish peace too. Yes it is true violence brings destruction. However, sometimes I think we fail to distinguish between the different forms of violence. In my opinion, there cannot be absolute peace and prosperity in Africa without some "holy" violence why because peaceful talks are always nonsense talks to the ears of a greedy monster.

Look at what happened in Egypt. It is a huge mistake to consider what happened in Egypt just violence without the "holy". Mubarak was in office for more than 3 decades and considered Egypt part of his inheritance and nobody could remove Mubarak with just peaceful talks inside closed doors. But where is Mubarak today after the decades of brutal reign? Mubarak is gone and democracy is beginning to gain roots in Egypt. Some may consider it a "democrazy" but the good thing is that, at least the world got to hear the voices of the poor Egyptians.

In a country like Zimbabwe for example, innocent people continue to die in record numbers from extreme poverty, hunger, corruption, failed government policies, etc. but the very sad part is that, these poor innocent Zimbabweans don't even have the voice to cry out for help or even to make their voices heard by the outside world. Robert Mugabe considers such acts heresy punishable by death according to his book of wisdom. Only those who know nothing about Africa considers Mugabe a hero. Mugabe has been in office for more than 3 decades deceiving the poor, enriching himself, and brutalizing all oppositions in the dark. Mugabe has been in office for over 3 decades yet Zimbabwe remains one of the poorest countries in all of Africa. Is this the mark of a good leader?

Nelson Mandela was able to lead South Africa into a democratic and prosperous society. What has Mugabe been able to achieve? Mugabe drove the White farmers away from Zimbabwe and took away their lands and properties but what did he do with those lands and properties? Mugabe gave those lands and properties to his immediate friends and relatives while the poor farmer had no land at all to farm on. Now Mugabe has all the farming lands he needs yet people continue to die in extreme poverty and hunger in Zimbabwe today. Is this the mark of a good leader? The poor Zimbabweans are afraid to revolt not because they love what Mugabe is doing to them but because they know what Mugabe will do to them in case such attempts fail. This is just an example of how some greedy monsters remain in power for decades upon decades without any opposition in Africa.

The point I am trying to make here is that, there is no way such a monster will go in peace and that, if the poor Equatorial Guineans do not stand up on their feet and revolt, this monster will continue terrorizing the country till his death and even after his death, his extremely corrupt and spoilt son will take over which means the trouble continues even into the next generation. This is the number one problem facing Africa today and that is why I think it is time we all come together as one people with a common destiny and fight these monsters amongst us.

Jerry Monarch A 4 years 3 months
We are not ignorant of the happenings in the Africa continent. A people rich in culture and endowed with riches now happens to be a land of acute shortage and poverty on account on leadership deficit. The young educated needs to wake up to this call. I strongly agree that if we do not take the stand now, our children will not have a place to call their own.