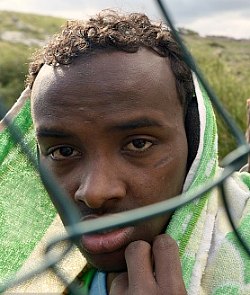 According to the UN Refugee agency, the number of refugees, asylum-seekers and internally displaced people worldwide has for the first time in the post-World War II era, exceeded 50 million people. In other words, more than 50 million people are displaced around the world today because of conflicts, poverty, persecution, climate change, etc. People are hunted down like wild animals in some lawless corners around the world in places like Somalia, Libya, Syria, Iraq, Yemen, Nigeria, Mexico, Afghanistan, etc. forcing several families to run for cover.

In Sub-Saharan Africa, extreme poverty and violence have put several young men on their toes in search for better lives. Take a look at what is happening in Burundi today.

In other words, sometimes people have no other choice than to take risks and make drastic moves. The push factors severely outweigh the pull factors in most cases and that is when illegal immigration comes in. In this article I will focus on the African migrants’ deadly journey to Europe through Spain.

Three of the biggest entry points for African migrants and refugees to Europe are through the western, central, and eastern Mediterranean. To tackle the unprecedented number of people risking their lives to enter its borders, Europe is spending hundreds of millions of euros to fortify its frontiers making it almost impossible for most migrants to make it. If 1000 people set out on the journey, only about 50 get to touch the barriers/fences and out of the 50, only 1 or 2 get through.

Now let us focus on the western Mediterranean route. One of the biggest entry ways for migrants and refugees into Europe is through Spain from Morocco and it makes sense because Spain is the only European country with land borders with Africa. Most migrants attempt to cross into the small Spanish enclaves of Ceuta and Melilla. These two remnants of Spain’s colonial empire effectively make Spain the only country in Europe with land borders with Africa. In other words, Melilla and Ceuta are two permanently inhabited Spanish cities in mainland Africa.  Melilla may look like a tourist town but it is primarily a strategic military and trading port. For migrants, there are three ways to get into Melilla. Those who have money and can afford it, use cars with undercarriages. Another way is by boat. It is costly but not as expensive. The third and the most popular is jumping the fence. Jumping the fence is the most common way for migrants and refugees to enter Melilla. In fact about 75 to 80 percent of migrants and refugees use this method. There are three border fences in Melilla; two on the Spanish side and one on the Moroccan side. Around the year 2000, it was just a normal fence but no more. These borders are about 12.5 kilometers long and about 6 meters high equipped with razor wires, hi-tech camera detectors, censors, etc. In other words, these fences are huge and dangerous making them almost impossible to climb. However, migrants and refugees (mostly from Africa and the Middle East) risk everything and storm these border fences in their thousands to overwhelm the border guards. Most won’t make it and will be beaten back by border guards.

Only the fastest and the strongest make it. The ones, who by luck and determination do, once in Melilla, have the possibility to be transferred to mainland Europe.  The ones who fail (sometimes severely wounded) retreat to nearby forest areas especially mount Murugu in Morocco where they build camps and stay until they are ready for the next jump. As if not enough, the Moroccan army patrol makes it even worse to live in these camps. The Moroccan army comes around 2am unnoticed just to beat and chase migrants away from the forest and then set the camps on fire. If you fall off while climbing the fences, you will mostly be okay but then the Moroccan army and police will come with bullets and batons and hit you over and over again targeting your hands and feet so you are not able to climb the fences again. Someone may ask; how is it in Morocco’s interest to prevent African migrants from entering Europe? Well, nobody knows the agreement between Morocco and Spain but what we know is that, for the last decade alone, Morocco has received more than 100 million dollars in technical and financial assistance in return for helping Europe tackle illegal immigration.

According to EU laws, once a migrant reaches European soil, they have the rights to legal assistance and interpreter. In other words, once a migrant jumps the fence from the Moroccan side of the fences to the Spanish side, they should be given those rights under EU law. Pushbacks are simply not allowed under EU and international laws. However, this is not the case in Melilla. Those who successfully make it to the other side of the fences are often caught and beaten by Spain’s Guardia Civil and then handed over to the Moroccan police straight away and are brought back.

There are several unknown graves along the way especially in the desert and close to the forests where migrants set up their camps. In other words, the 100s who die along the way are often buried sometimes in mass graves and forever forgotten.