Africa the worst place to be Gay: Uganda and Nigeria 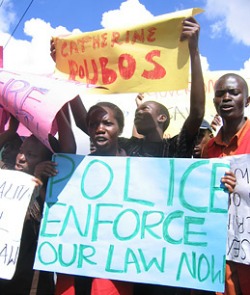 According to my grandfather, we don't have the right to do all things as some people claim. We only have the right to do all good things. The question however is, what are good things and how do we know for sure those things are good? The answer lies within us all. We don't need any holy book to teach us and we don't need any messenger to tell us what to do.

We all know the answer because our maker (or even evolution) did not deceive us at all. In fact, our maker gave us that power of "distinguishing" so as for us to distinguish between right and wrong naturally without any difficulty.

These are some of the questions many fail to answer before condemning homosexuals to death. Homosexuality is illegal in more than 37 countries in Africa today. In Uganda, a new bill is underway. Homosexuals can get anywhere from several decades to even life imprisonment. According to the new bill underway in Uganda (update: President Yoweri has signed the Bill into law), subsequent offenders may even get the death penalty just for being gay. President Goodluck Jonathan of Nigeria just signed a new anti-gay bill into law in Nigeria and according to the new law, any homosexual caught can get anywhere from 10 to 14 years in jail. It may however surprise you to know that most of our politicians in Africa today are homosexuals and even pedophiles themselves. Most of the so-called politicians and pastors in Uganda today are all nothing but pedophiles living double lives. Yet we allow these bastards to encourage us to stone our own brothers and sisters to death just for being homosexuals. There is something very wrong somewhere and I think we all need to wake up to reality.

I am not a homosexual and I don't support homosexuality as an act. However, does it make much sense to stone our own brothers and sisters to death just for being homosexuals? Does it make sense at all for any pastor or man of God to preach encouraging people to stone gay people to death? Does it make sense at all for any politician to declare war on gay people on national TV? It is a very sad situation in Africa today. Gay people are being hunted down like wild animals.

Pastors who were supposed to be voices of reason have all turned into some deceptive money-making killing machines spreading hatred all across the continent like wild fire encouraging people to brutalize homosexuals. Brutalizing homosexuals for some easy political points is the order of the day amongst those corrupt and greedy bastards called politicians in Africa today.

It is very sad how we allow those greedy bastards called politicians to deviate our attention from the more pressing issues facing Africa today. Instead of focusing on more pressing issues like poverty, hunger, HIV/AIDS, etc., our politicians spend all their time writing laws and modifying constitutions just to punish gay people. It is time we all wake up and start thinking.