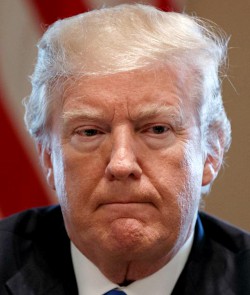 Not long ago, America’s president Donald Trump referred to Haiti, El Salvador and some countries in Africa as “shit-hole” countries. Although the internet exploded with anger in favor of Africa, Haiti, and El Salvador, Trump's comment wasn’t surprising to most of us. In fact, not so many of us got angry after hearing those disparaging remarks and the reason was because, we expected things like that to come out of the mouth of Donald Trump. In other words, we would be very angry had those remarks come from Barack Obama, Bill Clinton, or even George Bush. Why? Because, despite all their flaws, none of these leaders was or is as childish and irresponsible as Donald Trump.

On the other hand however, not so many of us were angry because there was some iota of truth in Trump’s childish remarks. In fact, had Trump managed to phrase those remarks in a matured way, none of us would be angry at all.

Personally, I wasn’t surprised at all because I have come to know Trump as a character and I know how low he can get. When it comes to Trump, we are not just talking about another president of the United States. We are talking about a guy who is officially racist, misogynistic, a sexual predator, homophobic, Islamophobic, xenophobic, and you name it. In other words, we are talking about a guy who under normal circumstances shouldn’t be president of the United States. Trump is like that illegitimate son who somehow managed to change their late father’s will and is now clinging on to every property their late father left while  the legitimate children, who the father had willed much of his properties to, continue to suffer.

As I mentioned earlier on, not so many of us were surprised because we always expected things like that from Trump and we expect even worse things to come out of him. Personally, Trump’s remarks weren’t as infuriating to me as the way some African leaders reacted. Yes there is some iota of truth in Trump’s remarks. Some parts of Africa are a hot mess and although I wouldn’t use “shit-hole” to describe them, they do quite fit that description. Take South Sudan for example with all its unnecessary fighting and killing of innocent civilians. Take Somalia for example with all the atrocities being committed day-in, day-out by Al Shabaab and other terrorist groups. Think about the "Chibok girls", the rape and torture, the numerous bombing and killings, and all the atrocities being committed every single day by Boko Haram and other terrorist groups in Northern Nigeria today. So in some respects, there is some iota of truth in Trump’s disparaging remarks and we need to face the Truth.

On the other hand, if Africa is a “shit-hole” today, it is mostly because of our crazy leaders and politicians. And by crazy leaders, I mean leaders like Yoweri Museveni the president of Uganda. This old fool (sorry for my language) came out a day after Trump’s remarks, praising Trump for the courage he (Trump) had in referring to Africa as a “shit-hole”, and blaming other African leaders for why Africa is a shit-hole. Meanwhile, Museveni is one of the biggest reasons why Africa is a “shit-hole” today. Museveni is without a doubt, one of the worst leaders in Africa today. He is a dictator, a "snake under grass" and very corrupt. Yet, Museveni has been in power since January 29, 1986 as president of Uganda. Despite Uganda’s abundance of natural and human resources, Uganda cannot even achieve a lower middle income status. Uganda is still considered a very poor country. Meanwhile, Museveni had the guts to praise Trump for calling Africa a “shit-hole”.

I have said it and I will keep on saying it. As long as old fools like Museveni remain in power in Africa, there is no way Africa can prosper. It is time the citizens of Uganda and similar African countries rise up and take control of their destinies by force. If not, we will forever remain “shit-hole” countries.

Mamadou 3 years 10 months
all I can say, Africa will rise when each person and each community pulls itself together.

Longford 2 years 5 months
Total shit hole. There is not even one decent building, bridge or road in all of Africa unless they were built by the white man.

Two legged man 8 months 3 days
In other words, you think Trump was right, you just don't like how he phrased what he said. This is a very feminine way of looking at this topic and Trump is anything but feminine. This is the root of the disagreement.

Humpy 7 months 2 days
Most of Africa is a shit hole, some people don’t want to hear the truth.