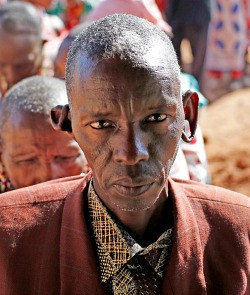 We face so many problems in Africa today. We face even problems we shouldn't be facing. If Muammar Gaddafi could turn a desert land into an agricultural land and feed his nation, why then should we complain of poverty and hunger in West Africa?

If Nelson Mandela could come out of jail after 27 years in the hands of oppressors and willingly forgive his oppressors, why then must Robert Mugabe continue to blame the very few innocent hardworking White farmers in his country for almost all the problems facing Zimbabwe today? If Muslims, Christians, Traditionalists and all the other religious groups could live peacefully and contribute their quota to the hopeful environment in Ghana today, why then must Sudan split into two? There is something very wrong somewhere. We suffer today in Africa not because Africa lacks the resources and what it takes. People are hungry and some even die of hunger in Africa today not because there is no food left in Africa.

When a defect/disease is acquired in the womb of the mother or is passed through the genes from parents to offspring, there is often very little we can do about it. In some cases, there is nothing at all we can do. Those are what science refers to as "birth defects". There are also diseases and defects we acquire in this world through our interactions with other beings and the environment in general. Although such diseases were not acquired directly through genes, they can be passed on to several other generations through gene interactions and our interactions with other beings and the environment in general. In the case of Africa, there is a defect eating all of us up yet nobody seems to know exactly where it came from and when it gained roots. We all know there is a defect but when and how it started remains the question.

Africa's political systems have failed the continent miserably. Africa's political systems have done almost nothing good for the continent that I know of. From Muammar Gaddafi's socialism to the absolute crazy rule of Omar Al Bashir. From Robert Mugabe's dictatorial rule to Teodoro Obiang's dicta-nonsense. From Morocco's monarchical rule to Swaziland's mona-chicken rule. From Ghana's democratic rule to South Africa's demo-friendship. From Egypt's democrazic rule to Nigeria's demo-haram. No political system seems to work for Africa.

Now the answer to the previous questions. We suffer today in Africa not because Africa lacks the resources and what it takes. We suffer today because of poor leadership and governance. Africa needs a political system that is tailored just for Africa. We inherited most of our current political systems from our colonial masters and so far, we all can say without a doubt that those political systems we inherited from our colonial masters have failed our beloved continent miserably. The western world often tries to impose their so-called "democratic" rule on Africa forgetting that Africa is a different continent with different dos and don'ts.

Let's take Libya and Egypt for example. Democracy may work in America and other western countries but that does not mean democracy can work in countries like Egypt and Libya where Islam is not just a religion but part of everyday life. Islam has its own political system laid down in the Holy Koran. Islam has its own constitution. Islam has its own way of judging cases and so it makes very little to no sense at all trying to impose democracy on the people in such societies without first separating religion from politics within such societies. And as we all know, it is almost impossible to separate religion from politics in places like Egypt and Libya why because Islam is not just a religion but part of everyday life. Islam is like the blood through the veins of these societies. Imposing democracy on the people within such societies is just like contaminating the blood flow or sucking the blood out of their veins. Sucking their blood dry is just like dropping an atomic bomb in their midst. Contaminating their blood flow on the other hand is just like poisoning them to death.

Although democracy may appear harmless and the best political system in the outside world, democracy is like a foreign agent in the bodies of the people living in such societies. Their bodies' immune system will launch a response to such foreign agents and it can turn tragic and a shock to their bodies especially in cases where their immune system loose the capability of overcoming the foreign agent. At the end of the day, the so-called democracy often turns into democrazy and complete nonsense. Not that democracy makes no sense but that democracy makes no sense within such societies where Islam is like the blood through their veins. Democracy may work in some Christian societies maybe because of the "breakdown" of the church. Take Nigeria for example. There is violence almost everywhere in the Islamic north while the Christian and Secular south seems OK with democracy. The same thing can be said about Sudan which split just recently into two countries, Islamic North and Christian South.

Asad Malik 4 years 3 months
I came across this article while creating a course for my organization and the author is RIGHT in that we need a system tailored for Africans. Dennis Moore asks why European systems are failing even Europeans. European systems were created by Europeans and based on European values and ways. If we are to transform Africa, we should abandon our copy-cat systems, think about what we wish to achieve as a continent and as a people, consider what values are important to us and THEN build a new system unlike anything the world has ever seen. The age of European domination is coming to an end, so now is the time to prepare ourselves and create something that works for us.