Africa as a continent: when to visit Africa 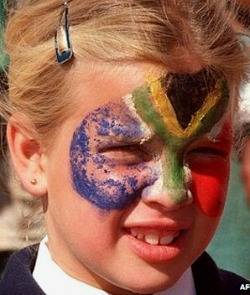 Former president George Bush once referred to Africa as a "country" instead of a "continent". Of course it was a slip of tongue which he immediately corrected. Africa is not a country but a continent of about 55 different countries. Africa is the second largest continent in the world today in terms of land mass and population size.

To all the wildlife lovers, No where in the world is there a movement of animals as immense as the Africa's wildebeest migration. Over two million animals migrate from the Serengeti National Park in Tanzania to the greener pastures of the Maasai Mara National Reserve in Kenya from July through to October. Yes it is rated one of the world's most spectacular natural events. If you are going to Africa to witness this spectacular natural event then the best time to visit Africa is the beginning ot July to the middle of October. However, if you can afford it, then the best time to visit Africa is Now. There are countries in Africa with spectacular tourist attractions and cultural display all year round and you can visit anytime you like.

Don't just go to Africa. Before you go, you must make sure you know which country you are going to and what you are going there to do. There are friendly countries like Morocco, Senegal, Mali, Burkina Faso, etc. you can visit all year round. Although countries like Ghana do not have much wildlife compared to other African countries, Ghana for example, has the best blend of cultural display and some of the most beautiful forest reserves on the continent which makes Ghana attractive all year round.

One thing I will like to point out is the language barrier. You can visit any African country you like because language barrier isn't a big issue these days. There are trained professionals in almost every African country who will help break the language barrier for you. However, if this is your first visit to Africa then I will advise you choose a country that speaks a language you understand to make things easier for you. If you are from an Anglophone country then I will advise you choose Anglophone countries like Ghana, Nigeria, Kenya, etc. for your first African visit. If you are from a francophone country then I will advise you consider francophone countries like Mali, Burkina Faso, Ivory Coast, etc. for your first African visit. On the other hand, if you are coming from a Portuguese-speaking country, then Angola would be a great place to start. For our Spanish-speaking friends, countries like Morocco would be great for you. This will make things easier for you.

Africans are without a doubt, the most hospitable people in the world. Africans are very hospitable especially towards foreigners. Hospitality is a huge part of our culture and traditions. You can travel to any country you like in Africa and come back safe. You may be a foreigner but nobody is a stranger in Africa. So when is the best time to visit Africa? The best time to visit Africa is now.