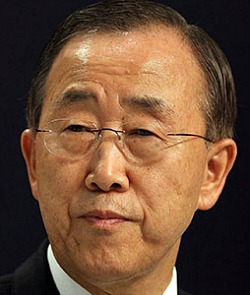 Not long ago, president of the Philippines, Rodrigo Duterte, threatened to leave the UN (using some very insultive words and calling president Obama the "son of a bi*ch") and the media went wild on him for that statement. I sided with the media because of the childish way Duterte put his words. That aside, the media also went wild on Duterte for another reason.

According to the media, it is unheard of for a third world country like the Philippines to threaten the most superior of all the world governing bodies we have today. Although it is quite unlikely that the Philippines will break away, several interesting questions crossed my mind.

After the two world wars, there was the need for a world governing body which would ensure peaceful resolutions to conflicts in order to prevent genocides and another world war. The United Nations was born. On the 26th of June 1945, representatives from 51 countries gathered in San Francisco to sign the United Nations chatter and the intention was to prevent the repeat of the 2 world wars that have killed an estimated of over 100 million people. Today, 193 countries have signed the chatter and regularly meet at the headquarters in Manhattan to discuss matters of international importance.

One of the main aims of the United Nations is to restore peace in war zones and to prevent genocide and to achieve this, a multi-national peacekeeping force was created in 1948. As of March 2016, this army has 104,773 uniformed troops around the world. A larger force than either Canada or Australia can withstand and a larger force than most third world countries can withstand.

It is true this peacekeeping force is under the direct control of the UN Security council but who exactly is the commander general of this heavily equipped force? Hervé Ladsous, a French diplomat, was appointed by the current UN secretary General Ban Ki moon. In other words, this large heavily equipped armed force larger than most countries’ militaries is under the direct control of an unelected official. Not just that. Exactly where this heavily equipped force is deployed is decided by the very undemocratic UN Security Council.

Another major problem with multi-national neutral peacekeeping force intervening in foreign affairs is that, often it is not wanted by either side of the conflict. Why would any country reject a UN intervention? Well, the 5 permanent members (The US, The UK, France, China, Russia) and the UN Security Council often intervene in places and in cases where there are some sort of financial (and not necessarily moral) gains to be made.

Also, UN troops have been accused of misconduct against the people they were supposed to be protecting. For example, between 2013 and 2015, French UN peacekeepers allegedly sexually assaulted over 99 girls in the Central African Republic. Three of those girls were allegedly forced to have sex with animals by a UN commander. In Bosnia, peacekeepers were accused of helping traffic young girls into sex slavery. We can go on and on. With this track record, the UN is unwanted in most war zones "why?" Because the UN has the potential to escalate conflicts.

Christopher M. Williams 4 years 4 months
Thank you for your brilliant analysis. You raise a lot of questions:

1. Is the UN democratic and can the UN model democracy within itself and its membership and if the UN cannot, why is democracy a tool for analysis?

2. Democracy follows the number of numbers. How do we continue to have these five patronizing members of the Security Council without all the members voting them in? We in political science thought that the Security Council was the Steering Committee of the United Nations. Anything magical conjured without tenure and democratic membership and voting rights to belong must be classified as another form of slavery.

Can anyone explain why democracy has been watered down to no one to one vote? Why do all the members vote not count? Why are members of the Security look like bullies who use their bank accounts and try to intimidate others using their corruptible means like the former President of the United States. The classic Russian puppet in American history. The World is laughing.