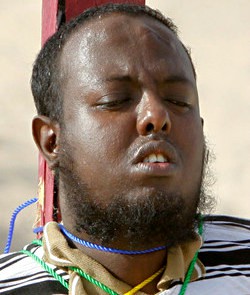 Although many African countries have not officially abolished the death penalty, many have carried out no executions in the past 10 years or so.

Officially, only 16 countries (including Egypt, Nigeria, Somalia, Libya and Sudan) have and maintain the death penalty in both law and practice. In fact, in 2016, Egypt alone carried out over 44 executions followed by Somalia with about 14 executions. Both Nigeria and Sudan carried out 3 executions each in 2016 while Botswana executed 1 person. 29 countries out of the 54 UN member countries in Africa have officially abolished the death penalty for all crimes. Although 18 member countries permit the use of capital punishment for ordinary crimes, none of the 18 has carried out executions in the past 10 years or so and many are believed to have some policies in place of capital punishment.

It may surprise you to know however that, America the most industrialized country on earth, executed not less than 20 people in 2016. China executed thousands. Countries like Iran and Saudi Arabia executed hundreds if not thousands.This does sound quite barbaric and insane but the question is; who are we to judge? It is absolutely true that sometimes, some crimes deserve worse than capital punishment (Think about serial killers and rapists). However, since we are not cats with 9 lives, we can never fully pay for some crimes we commit.  In other words, it is only fair for one to at least partially pay for his or her crimes with the “one” life we all have. The point I am trying to make here is that, capital punishment and the death penalty make perfect sense in most cases.

The “barbaric” nature of capital punishment in some situations seems to revolve much around the “judgement” and the “sentencing” than it does around the execution itself. Why? Because some crimes and some criminals deserve even worse punishments than the death penalty can offer. On the other hand however, we are humans and humans are full of errors. We can be wrong even when we feel 100% certain in our hearts that we are right. There is no doubt many innocent people are in jail today for crimes they know nothing about and to “accidentally” put an innocent man to death in this modern age and time, is something beyond barbaric and that is why the death penalty should be abolished for good. Also, if life is that precious to us then does it make much sense to give some selected few the legal rights to take another man’s life?

#1 Nelson
If life is that precious to us why is it that some people feel like that they can end other people's lives, or can damage it to a point where the victim feels like death would have been much better? Sentencing someone to imprisonment is sometimes not a harsh enough punishment especially when we take into consideration the fact that, they are going to be clothed, fed and educated at the expense of tax payers, basically the only thing that was taken from the perpetrator was their freedom of movement. Obviously you cannot just sentence every killer or rapist to death every time a crime of that sort is committed, every case has to be dealt individually having a look at the circumstances around the crime. I personally feel like, especially in South Africa, the death penalty can be used (if regulated properly and issued as a last resort) as a deterrence against violent crimes that seem to be happening so frequently.
Quote
Refresh comments list
Add comment