Africa and AIDS: Homosexuality and Pedophilia 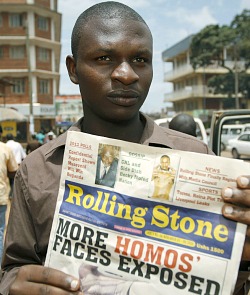 Homosexuality which used to be very unheard-of in Africa just a few decades ago, is beginning to gain roots in Africa and all thanks to western culture and the so-called "educated/literate" life in Africa today.

What makes us Africans is our culture and traditions. There is no moral lesson in the Bible you cannot find in the true African culture and traditions and there is no discipline the Quran mentions that the African culture and traditions ignore. I remember in high school we used to live together peacefully in boarding houses. We used to bath, eat, sleep together sometimes with the lights out but I never even heard of the word homosexuality let alone students caught in such a taboo. These days however, parents are afraid to send their children to go live in boarding houses why because our boarding houses here in Africa are full of homosexuals who continue to prey on innocent children all day and night. Some may ask, is it just students preying on their fellow students? The answer is No. These days, adult homosexuals and pedophiles are turning our high schools and boarding houses here in Africa into "Sodom" and "Gomorrah" where they come and go in their numbers preying on innocent souls all day and night.

Some may ask, is it just Africans preying on other Africans? The answer once again is a very big NO. Although there are some homosexuals in Africa, the majority of them are from the outside world. Majority of them come as tourists with the evil intentions of ruining the lives of innocent people especially young school boys and girls. They lure these innocent boys and girls with money and gifts and destroy their tiny little souls sometimes in bushes. Someone may ask, are homosexuals in Africa not human beings? The answer is yes homosexuals are human beings. However, in Africa, homosexuals are abnormal human beings and therefore deserve to be treated differently. I know in the so-called advanced countries around the world, people go to the extent of writing laws and modifying constitutions promoting such taboos. However, we cannot do the same here in Africa because we are "Africans" and our culture and traditions are what keep us going in this wicked world and we cannot throw away our culture and traditions. Embracing homosexuality in Africa is just like throwing away our very sense of identity something we cannot do.

I am not judging homosexuals and I am not calling them evil. What I am saying is that, homosexuality as an act goes against our culture and traditions and we cannot allow such taboos in Africa. I know in some societies in Africa, homosexuals are even afraid to come out in the open as homosexuals because that could be a death sentence. The outside world sometimes considers such acts towards homosexuals as barbaric and the reason is because the outside world fails to consider the harmful effects of such taboos in Africa, a land where culture and traditions reign supreme. Some may ask, what if the homosexuals were born that way? That is a questioin only time can answer. My great grandfathers knew nothing about homosexuality. Is it because nobody was born gay in their time? In high school I never once heard of two male students caught sleeping together. However, today in our schools, homosexuals are caught in the act almost every now and then. Is it because more people are born gay today than it was just a few years ago? Up till now science still can't find that "gay gene" or the genetic factor responsible for homosexuality yet several countries and people around the world are busy writing laws and constitutions promoting homosexuality just because science says MAYBE gay people were born that way. I am just an African not a scientist so I'll leave that scientific part aside for now.

I am an African and I know how it feels to belong to a minority group and I know how it feels to be treated differently just because of your skin color, your religion, etc. In other words, I would be the one advocating for homosexuals if homosexuality made sense to me at all. However, in my opinion, homosexuality is a harmful foreign culture introduced into Africa just recently. Homosexuality in Africa is just a learned harmful behavior which is destroying our culture and traditions. I believe nobody was born gay and homosexuality is such a barbaric behavior that we should not tolerate at all in Africa. Let the so-called advanced countries continue promoting such barbaric behaviors but we are Africans and our culture and traditions are what make us Africans and we cannot tolerate homosexuality here in Africa. There is another form of sexual exploitation besides homosexuality going on in Africa called pedophilia whereby older men and women from the outside world come in their numbers to Africa as tourists just to molest little boys and girls some as young as 6 and if you think such barbaric acts are OK in Africa then you better check yourself.